0 10
Share
Sport
Srinivas was offered a trial by the Sports Authority of India (SAI) after his records in a Kambala race went viral.
Prajwal Bhat
Subscribe to our newsletter 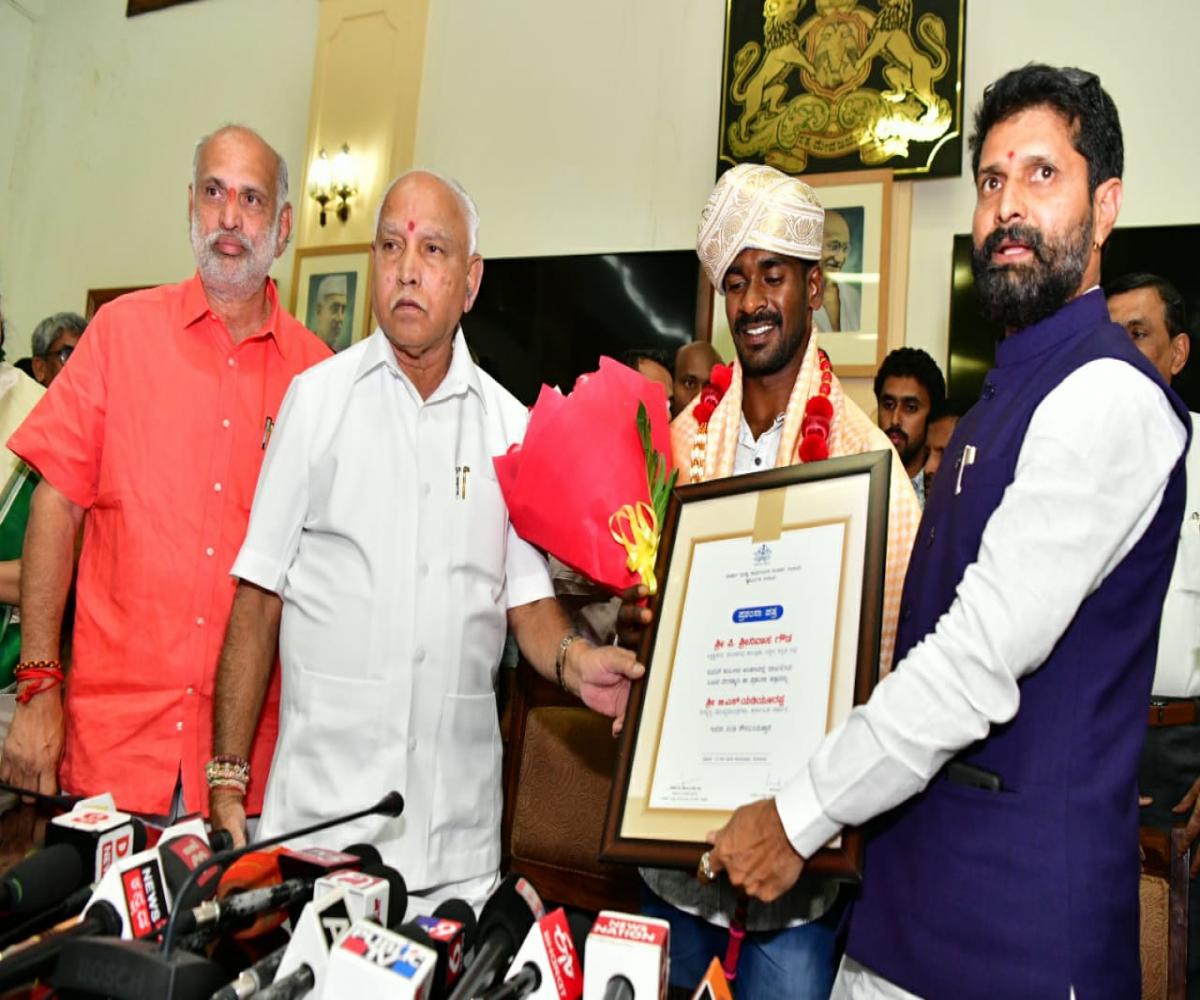 It has been a whirlwind week for 28-year-old Kambala jockey Srinivas Gowda. His record-breaking run in a Kambala race held in Dakshina Kannada on February 1 was compared to the feats of sprinter and world-record holder Usain Bolt.
Srinivas was then offered a trial by the Sports Authority of India (SAI) either in New Delhi or Bengaluru but he has decided to postpone it until after the current Kambala season ends on March 7. Instead, Srinivas travelled to Bengaluru to meet Karnataka Chief Minister BS Yediyurappa at the Vidhana Soudha on Monday.
Addressing media persons, Yediyurappa showered praise on the Kambala jockey whose popularity soared this month. “We are celebrating Srinivas Gowda’s record-breaking feat. We are also celebrating Gunapada Kadamba, whose academy — Kambala Academy in Moodabidri — trains Kambala (jockeys). Kambala is a traditional sport of Dakshina Kannada and Srinivas Gowda has broken records. Yesterday, in the Venoor Kambala race, Srinivas Gowda ran 142 metres in 13.68 seconds,” Yediyurappa said.
Srinivas Gowda, who was uncertain of facing reporters, said that he was happy that the traditional sport of Kambala gained recognition through his feats. “I am happy because this sport has been honoured. The public outside has learnt about our traditional sport. This feat is due to the buffaloes and because we took care of the buffaloes that I was able to run fast with them. In the next few weeks, I have Kambala races to take part in,” Srinivas Gowda told reporters in Bengaluru.
Srinivas Gowda shot to fame after he ran 142.50 metres in 13.62 seconds, considered the fastest run in the traditional buffalo racing sport of Kambala. Although he made the run on February 1 in a Kambala event held in AIkala village of Dakshina Kannada, his popularity soared when journalists and social media users compared his run to the 100-metre world record held by Usain Bolt. He was calculated to be faster than Usain Bolt’s 100-metre world record timing of 9.58 seconds. However, this calculation overlooked the fact that he ran on a slushy track with the support of his teammates – the buffaloes.

Gunapala Kadamba, who is the president of the Kambala Academy in Moodabidri where Srinivas trained, told TNM that Srinivas’ new-found popularity has come as a surprise to him and that he needs time to think about whether he wants to switch to track races. “He is committed to a few more Kambala races until March 7. He feels that he is not qualified for track races. He knows that he runs fast with the support of the animal on slush tracks. But it is different from running on synthetic tracks wearing spikes. We are very proud that he has received this invitation but he has not seen many track races and we cannot spring this on him at once,” says Gunapala.
Union Sports Minister Kiren Rijiju on Saturday stated that he had invited Srinivas for a trial by top coaches from SAI. Srinivas Gowda has maintained that he considers Kambala to be his sport and has not thought about running on track. Speaking earlier to TNM, he credited the buffaloes for the record breaking run. “I mainly exercise and swim every day. Once a week, I practice running on the slushy track,” he said.

The 28-year-old is a construction worker during the off season when Kambala races are not held. He trained at the Kambala Academy in Moodabidri and has been involved in the traditional sport for the last seven years.
Kambala is the traditional buffalo racing sport popular in the coastal districts of Karnataka. The word ‘Kambala’ in Tulu means paddy field with slush and mud. In Kambala races, a pair of buffaloes tied together run on parallel slush tracks with a farmer controlling them usually using whips.
A ban on the sport was initially sought along with the Supreme Court order that banned Jallikattu, the popular bull taming sport of Tamil Nadu in 2014. But it was only in 2016 that the sport was banned in Karnataka by a High Court order. However, it was allowed to continue in 2017 after the President gave assent to the Prevention of Cruelty to Animals (Karnataka Amendment) Ordinance of 2017, which excludes Kambala from the list of activities considered as practices involving animal cruelty.

What we’re listening to: Caspian

How internet is making live events, religious occasions and more possible amid…

With no relief or clarity from government, NREGA workers seriously affected

Samsung Galaxy Chromebook review: Great, until the battery runs out

Richa Sharma: I really want to sing a romantic number